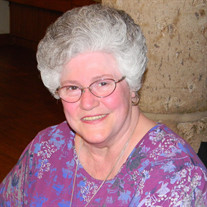 Sylvia Borne Hebert, 73, of Houston, Texas passed away on Friday, October 19, 2018. Sylvia was born in Port Arthur, Texas on December 23, 1944 to the late John Alcie Borne, Jr. and Romanell Pitre Borne. Sylvia was a dedicated parishioner of St. Andrew Roman Catholic Church in Channelview, Texas, she was a member of the Roman Catholic Cursillo and active in Prison Ministry. Sylvia was an avid card player, she loved all of her family and friends with all of her heart and to know her was to love her. Those left to cherish Sylvia’s memory are her son, Bryan Hebert and his wife, Rhonda of LaPorte, Texas; daughter, Teri Dusold and her husband, Phil of Bastrop, Texas; brothers, Norman, Thad and Joseph Borne; grandchildren, Brett Hebert, Jeff Phillips, Austin Phillips, Christopher Hebert; and nine great-grandchildren. In addition to her parents, Sylvia is preceded in death by her brother, John Alcie Born III. A gathering of family and friends will be held at St. Andrew Roman Catholic Church in Channelview, Texas on Tuesday, October 23, 2018 from 5:00 p.m. until 8:00 p.m. with a Rosary and Christian Vigil Service to begin at 4:00 p.m. A Mass of Christian Burial will be held at St. Andrew Roman Catholic Church in Channelview, Texas on Wednesday, October 24, 2018 at 10:00 a.m. with Father Christopher Shackelford, celebrant. The committal service will follow the Funeral Mass at Calvary Cemetery in Port Arthur, Texas at 3:00 p.m. with Father J.C. Coon, officiant. Services are under the direction of Melancon’s Funeral Home, Nederland, Texas.

The family of Sylvia Borne Hebert created this Life Tributes page to make it easy to share your memories.

Sylvia Borne Hebert, 73, of Houston, Texas passed away on Friday,...