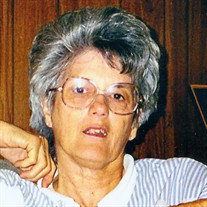 Sylvia McFarland, 82, passed away Easter morning, after a long battle with lung issues. She was born and raised in Port Arthur, Texas, to Benard Dore’ and Stella Romero Dore’, on September 20th, 1937. She attended Saint Mary’s Catholic School, Woodrow, Willson Junior High, and graduated in 1957 from Thomas Jefferson High School. After high school, she decided to further her education by attending Port Arthur College for two years, pursuing business. Upon graduation, she went to work at Texaco Island. In 1962, she met the love of her life, Paul McFarland, whom she was married to for 57 years, until her passing. She then worked at Mac’s Grocery Store for 10 years, where she eventually became a co-owner alongside her husband. They owned the store for 8 years. After the grocery store closed, Sylvia retired and spent the remainder of her life as a loving wife, mother, grandmother, and great grandmother. She is preceded in death by her parents Ben and Stella Dore’, and her sisters, Agnes Verett and Bernice Boudreaux. Those left to cherish Sylvia’s memory are her children, Michael McFarland, Timothy McFarland, and his fiancé Felicia Long, Melissa and Todd Domingue, and Kristi McFarland. She is also survived by her 7 grandchildren, Brandon McFarland, Aaron McFarland, Logan Domingue, Colton Weisbrod, Elise Perkins, Shane Domingue, Hope Perkins, and six great grandchildren. The pallbearers are those as named, Brandon McFarland, Aaron McFarland, Colton Weisbrod, Austin Mendez, Shane Domingue, and Logan Domingue. Under the restrictions of the CDC due to COVID-19 virus, a visitation of family and friends will be held at Melancon’s Funeral Home in Nederland on Thursday, April 16, 2020 from 12:00 p.m. to 1:30 p.m. A graveside service will follow at Memory Gardens of Jefferson County in Nederland. Services are under the direction of Melancon’s Funeral Home.

Sylvia McFarland, 82, passed away Easter morning, after a long battle with lung issues. She was born and raised in Port Arthur, Texas, to Benard Dore&#8217; and Stella Romero Dore&#8217;, on September 20th, 1937. She attended Saint Mary&#8217;s... View Obituary & Service Information

The family of Sylvia Jean McFarland created this Life Tributes page to make it easy to share your memories.

Sylvia McFarland, 82, passed away Easter morning, after a long...