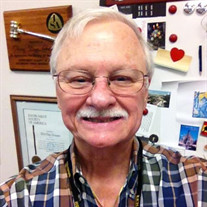 Terry Dan Grissom, 69 of Port Neches, TX passed away at his home on Monday, March 8, 2021. Terry Dan was born on July 20, 1951 in Dallas, TX to the late Dan and Peggy Grissom. Dan proudly served his country in the United States Army from 1969 to 1975. After an honorable discharge, he entered the work force. Dan loved his job and was a true workaholic. His motto was, “Work till You Die and Take Really Good Vacations.” Dan was employed at Richard Design Services as a Project Manager for many years. He retired from RDS in 2019 due to his health issues. You could easily find his office in the RDS building. All you had to do was follow the smell of chocolate. Not only that, his office was always decorated for the current season. Besides his family, Dan had many other interests in his life – pocketknives, reading and collecting books, dragons, bagpipes and of course, the U.S. Army. Dan was a long-time member of St. Elizabeth Catholic Church and the Knights of Columbus, Council #2461. Those left to cherish his memory are his wife of 42 years, Judy Ann Grissom and his daughter and son-in-law, Danielle and John Laird, along with his only grandson, Nicholas John Laird. He is also survived by one sister, Sherry Zehr and husband Jerry and one brother, Ed Grissom. He is preceded in death by his parents and sister, Cyndy Bynum. Family would like to extend a special thank you to Kindred Hospice for their care, especially caregivers Natasha, Kim, Victor, Lisa and Regina. Arrangements are under the direction of Melancon’s Funeral Home in Nederland. Visitation will be at the funeral home from 5:00 p.m. to 8:00 p.m. on Friday, March 19, 2021. Funeral services will be at 10:00 a.m. on Saturday, March 20, 2021 at St. Elizabeth Catholic Church in Port Neches, TX. Interment will follow at Oak Bluff Memorial Park in Port Neches. Memorial contributions in Dan’s honor can be made at either the American Cancer Society at P. O. 22478, Oklahoma City, OK 73123 or The National Museum of the U. S. Army, Attn: Memorial Gifts, 1775 Liberty Dr. Ste 400, Fort Belvoir, VA 22060.

Terry Dan Grissom, 69 of Port Neches, TX passed away at his home on Monday, March 8, 2021. Terry Dan was born on July 20, 1951 in Dallas, TX to the late Dan and Peggy Grissom. Dan proudly served his country in the United States Army from 1969... View Obituary & Service Information

The family of Terry Dan Grissom created this Life Tributes page to make it easy to share your memories.

Terry Dan Grissom, 69 of Port Neches, TX passed away at his home...