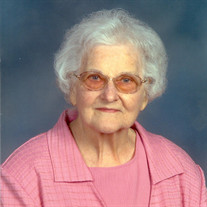 Thelma Stinson McGee went to her heavenly home on July 8, 2019 at age 92. Born on November 12, 1926 to the union of Lantie “Pat” Austin and Roy Stinson, Thelma grew up in and around Nacogdoches, TX. She married V. E. “Red” McGee in February 1946. They had three daughters: Kay, Lynn, and Beth. Thelma and Red raised their family in Woodville, TX, where she worked as a nurse. They were active members of the First Baptist Church in Woodville. Through the years, Thelma held various positions at the church. While her girls were growing up, she was involved in leading the GA’s (Girls in Action) Missions program, and for several years was the GA camp director at East Texas Baptist Encampment in Newton, TX. After retirement, Thelma and Red traveled around the United States in an RV, working with the Volunteer Christian Builders organization to build and renovate churches across the nation. Mama Thelma, as she was called by her seven grandchildren, was an active grandmother. Each summer, she hosted “cousins week” at her house, and created all sorts of fun adventures for her grandchildren to enjoy: berry picking, swimming, backyard campouts, trips to Galveston Island, late night games of dominos, hot water tea parties, and lots of her good home cooking. Thelma was a skilled seamstress, and enjoyed sewing crafts of all kinds: knitting, crocheting and quilting. Following the death of her husband, Thelma moved to Nederland, TX to be closer to her family. Even as her health declined and she eventually became homebound, Thelma was still involved in serving others. During this season she was an active part of the Procter Baptist Church prayer shawl ministry and knitted hundreds of prayer blankets to give to others, as well as taught several other women how to knit. Thelma was preceded in death by her husband of 54 years, V. E. “Red” McGee, her parents, and her son-in-law Malcolm Terry. She is survived by her three daughters: Kay Terry of Jena, LA; Lynn and husband Rick Erwin of Nederland, TX; Beth and husband Jerry Dardis of Beaumont, TX. She also leaves behind seven grandchildren and 29 great-grandchildren to cherish the memory of her bright and vibrant life. Thelma came to salvation in Jesus Christ as a young mother in 1947. Afterwards, she held to her faith in Jesus Christ with unwavering devotion. It is for this reason that we grieve with hope. The family will receive visitors on Wednesday, July 10th from 10 to 11 am at Melancon’s Funeral Home, with a funeral service to follow at 11 am. The graveside service will be held at 2:30 pm that afternoon in the Mt. Pisgah Cemetery in Woodville, TX. In lieu of flowers, please make donations to the Volunteer Christian Builders through Procter Baptist Church, 4401 Jimmy Johnson Blvd, Port Arthur, TX 77642.

The family of Thelma Stinson McGee created this Life Tributes page to make it easy to share your memories.