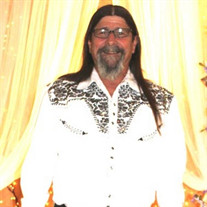 Vincent “Vinny” Montalbano, Jr., 62, of Groves, passed away on Thursday, March 23, 2017 at his residence. Vinny was born on October 24, 1954 to the late Vincent Montalbano, Sr. and Minnie Morrell Montalbano, in Beaumont, TX. He was a lifelong resident of Groves and he was employed by LNG Betchal and a truck driver in the oil industry. Vinny served our country in the United States Marines. He also was a lifelong area musician and he touched many lives organizing and working benefits to help those in need. Vinny was well known during his lighthouse days as “Nose”. Vinny is survived by his wife, Sandra Montalbano of Groves; daughters, Kelli Simoneaux Campbell and Katrina Vance; sister, MaryAnn Montalbano Baldwin; three grandchildren and a host of loving nieces and nephews. He was preceded in death by his parents. There will be a gathering of family and friends on Monday, March 27, 2017 from 5:00 p.m. to 8:00 p.m. at the Encounter Church located at 5300 Twin City Hwy in Groves, TX. The funeral service will be on Tuesday, March 28, 2017 at 11:00 a.m. with Pastor Kenny Miller officiating, also at the church. The interment will be Friday, March 31, 2017 at 3:00 p.m. at Magnolia Cemetery in Beaumont, TX. In lieu of flowers, the family has asked that donations be made to M.D. Anderson Hospital, Cancer Research in Houston, TX.

The family of Vincent "Vinny" Montalbano, Jr. created this Life Tributes page to make it easy to share your memories.