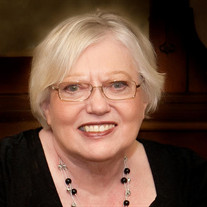 Born in a little farmhouse in Gate, Oklahoma, Virginia Dawn Vance barreled into the world January 25, 1944. She was the first of five children born to Percival Schauner Vance and Lenora Mae Campbell Vance. A little spitfire from birth, she made an impression everywhere she went. After the family moved to Texas, they came to live in Vidor when Virginia was a teenager. There she met the love of her life, Louis Franklin Bowen. They married June 2, 1961 when she was 17 and still in high school, but they were in love and their story began. Their story moved them around quite a bit, but they stayed in Southeast Texas. They were blessed with two children, Gregory and Jill. And, later with those two, they were blessed with four grandchildren, Lauren, Corey, Skylar, and Katherine. They were wonderful parents and grandparents and their children and grandchildren are a testimony to their legacy. Their life together was an adventure. And a life they loved. In addition to motherhood and being a wife, Virginia almost always worked outside of the home. She was a secretary numerous places, a real estate agent, a property value assessor, a property management guru, all the while helping Louis in his business as his secretary and bookkeeper. In all things, she demanded excellence from herself and was efficient and accomplished. God was always her priority. She believed in Him and trusted Him in her life. Her acts of service to His Kingdom included playing the piano and/or organ at church, volunteering as secretary/treasurer, and pretty much whatever needed to be done. She was a good and faithful servant. Monday, September 16, 2019, she closed her eyes here on earth and opened them in heaven. This day was one month to the day after losing her Louis. We can only imagine her joy as her earthly pain was gone, she is reunited with Louis, and the many loved ones who were there waiting for her, and she was finally in the presence of her God. Virginia Bowen changed the world in her way, and we will never forget the loving, stable, mature, thoughtful, and beautiful lady that she was. She will be missed.--

Born in a little farmhouse in Gate, Oklahoma, Virginia Dawn Vance barreled into the world January 25, 1944. She was the first of five children born to Percival Schauner Vance and Lenora Mae Campbell Vance. A little spitfire from birth, she... View Obituary & Service Information

The family of Virginia Dawn Bowen created this Life Tributes page to make it easy to share your memories.