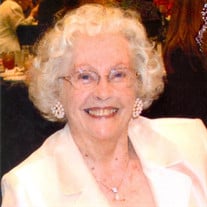 Virginia “Ginny” Thorne Avery passed away on October 26, 2021. She was born on March 9, 1927 in Fort Worth, Texas and moved to Port Arthur in 1929. She is survived by her sister Florence Garrett; sons William and wife Colleen Avery, Daniel Avery, Thomas and wife Rose Ann Avery, David and wife Linda Avery; grandchildren Bill Avery, Lauren Avery Willison, Christopher Avery, Hannah Avery, Michael Garrido, and Mellissa Garrido-Martinez; great-grandchildren Agustin Martinez and Alexis Martinez, and several nieces and nephews. She was preceded in death by her husband William O. Avery, Jr., her sister Corrine Collins, her brother Lawrence E. Thorne, daughter-in-law Jill Avery, and grandson Daniel Avery. Virginia graduated from Thomas Jefferson High School where she was a member of the Red Hussars Drum & Bugle Corp. She earned a BA degree in Education from the University of Texas, after which she enjoyed a long teaching career with the Port Arthur Independent School District before retiring in 1991. She was a beloved teacher at Tyrrell and then Travis Elementary schools. A long time member of the First Presbyterian Church where she was a member of the choir, she later joined the Methodist Temple. Following the premature death of her husband in 1965, Virginia dedicated her life to raising her four sons and supporting their many activities. She was an avid sports fan and enjoyed pulling for the Astros, Texas Longhorns and even became a converted fan of the Texas A&M Aggies. What she loved the most was spending time with her family; always asking when the next visit would be and reminding her sons and grandchildren that the door would always be open. Graveside services will be held at 11:30 a.m. Thursday, November 4, 2021, at Greenlawn Memorial Park in Groves, Texas under the direction of Melancon’s Funeral Home in Nederland, Texas. Serving as Pallbearers will be David Guarnere, Mike Melancon, Quincy Faulk, Phil Losac, Glenn Billeaud, Leroy Falcon and Mike Simon.

The family of Virginia "Ginny" Thorne Avery created this Life Tributes page to make it easy to share your memories.