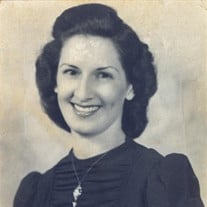 Willie Mae LaGrange was born May 28, 1917 to the late Harry J. Romero and Mary Ella Victoria Robicheaux of Centerville, Louisiana. She was baptized Willina May Romero, but went by Willie Mae Romero. She passed away December 31, 2016. She lived in Port Arthur and was a graduate of St. Mary’s High school in Port Arthur, Texas. She married Edward John LaGrange, a veteran of World War II, of Franklin, Louisiana, and she was a homemaker in Franklin and in Groves, Texas, where they spent most of their married life. She was a member of Immaculate Conception Catholic Church of Groves where she was active in church functions and also St. Elizabeth’s Catholic Church in Port Neches. She was also a member of the “Red Hat” Society at Cypress Glen East in Port Arthur. She was an avid seamstress and enjoyed cooking and knitting and visiting her Children and Grandchildren. Her ambition before marriage was to be a Hairstylist. In addition to her parents, she is preceded in death by her husband, Edward John LaGrange and her son, Ricky John LaGrange. Survivors include her children: Glenn LaGrange and wife Peggy, Karen Manske and her husband Arnold, Ella Wilmore and her husband Jeff. 5 grandchildren: Kelly Galloway, Michael LaGrange, Melissa Manske, Sophie Sarda, and Zack Wilmore and 1 great-granddaughter Gabrielle Galloway. 5 step-grandchildren: Cyndy, Julie, Leah, Courtney, Amy, Zack Galloway and her God-son Randall Robicheaux of Franklin, La. A brief viewing by family and close friends will be held on Tuesday, January 3, 2017 from 8:00a.m. until 9:30a.m. at Melancon’s Funeral Home in Nederland. A Mass of Christian Burial will be held at Immaculate Conception Catholic Church in Groves on Tuesday, January 3, 2017 at 10:00a.m. with Father J.C. Coon as Celebrant. Burial will follow at Oak Bluff Memorial Park in Port Neches. In lieu of flowers, the family request that donations be made to Catholic Charities.

Willie Mae LaGrange was born May 28, 1917 to the late Harry J. Romero and Mary Ella Victoria Robicheaux of Centerville, Louisiana. She was baptized Willina May Romero, but went by Willie Mae Romero. She passed away December 31, 2016. She lived... View Obituary & Service Information

The family of Willie Mae Romero LaGrange created this Life Tributes page to make it easy to share your memories.