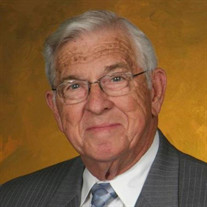 Zack Byrd December 3, 1932 -March 6, 2018 Born in Mount Vernon, Texas to Morris Byrd and Sally Tinsley Byrd Married to Melba Ruth (Cookie) Bumstead Byrd in Warren, Texas on July 7, 1957 He graduated from Mount Vernon High School. Zack earned his Bachelors degree from East Texas State University and Masters degree from Stephen F. Austin University. He also studied under the Doctoral program at Texas A & M University. Zack proudly served in the U.S. Army in Austria and Italy and was a veteran of the Korean War. He was a life long educator. Zack began his career as a Woodshop and Industrial Arts teacher at Woodlawn Junior High and worked as a Counselor, Assistant Principal, Principal and Superintendent in Port Neches-Groves ISD, spanning a career of 35 years. He also served as an interim Superintendent in Sabine Pass ISD and High Island ISD. He concluded his career in education at the age of eighty. Zack was an active member of First Baptist Church, Port Neches, Texas where he served in many capacities for over sixty years. Zack’s heart belonged to his family, especially his eight grandchildren. His hobbies were farming and woodworking, which he passed on to his children. Zack and Cookie shared a life of almost sixty-one years. His children are Keith and Judy Byrd, Grant and Jill Byrd and Steve and Amber Byrd Morris. His grandchildren are Lindsay Byrd, Kerry and Katelyn Byrd Hlanak, Alex and Caroline Byrd Dyer, Zack Chance Byrd, Keegan Byrd, Darby Byrd, Reed Morris and Wyatt Morris. They were the light of his life and he theirs. Celebration of Life for Zack will be held Thursday, March 8, 2018 at First Baptist Church, Port Neches, Texas. Visitation will be at 11 am followed by the service at 1 pm. Internment will follow at the family cemetery in Warren, Texas. Services are under the direction of Melancon’s Funeral Home, Nederland, Texas.

The family of Zack Byrd created this Life Tributes page to make it easy to share your memories.